These are the places we visited in Jordan,

Petra far exceeded my expectations! We set out at 7:30 am and spent the day exploring the extensive archaeological site of a city that thrived from the 1st century BC until the 4th century AD. It is now a World Heritage Site. The city was built by the Nabataeans and prospered because it was on a trade route between the Mesopotamians and the Egyptians and catered to the caravans carrying the popular incenses, frankincense and myrrh, and spices.

Romans incorporated the city into their Empire and the city continued to thrive until an earthquake in the 4th century destroyed a large part of it. As changes in trade occurred, the city was eventually abandoned by the 7th century. Known only during following centuries by the local Bedouins, the site was discovered by a Swiss explorer, Johannes Burchardt, in 1812. Since then it has attracted archaeologists and visitors from all over the world.

The entrance to the site took us down a trail between cliffs. Along the way we saw evidence of shrines carved in the stone as well as tomb chambers.

The trail took us to the main avenue of the site where we encountered the “Treasury.” Probably constructed in the 1st century BC by the Nabataeans , it is carved out of the red sandstone cliff. Large chambers inside were used for the burials of a family. This is just one of many similar structures nearby, but none have a façade that is as well preserved. The architectural features and images show an influence from many other cultures (Mesopotamian, Egyptian, Greek, and Roman) combined in an inventive manner. Based on this structure, one can only imagine how absolutely splendid the rest of the city must have been. Notice the tiny people standing by the steps to give a sense of scale. The facade is 98 feet high.

There were lots of camels and donkeys to take visitors to the sites.  The main avenue is about 3 miles long from the entrance and then there are several paths leading off of the avenue.

Along the avenues and paths are “pooper scoopers” to keep the walking paths clean. 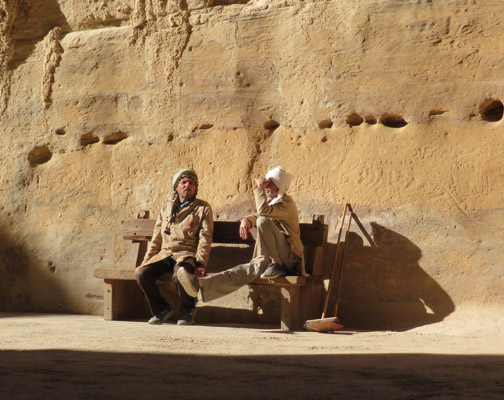 On the approach to the metropolitan area, we encountered many rock cut tomb sites. 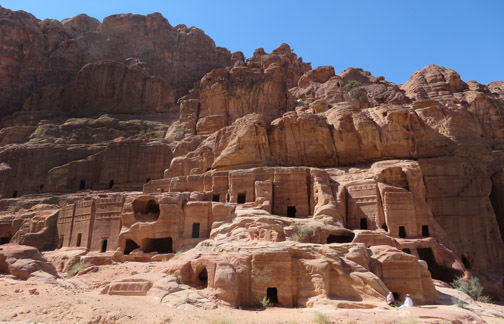 As we walked along the main avenue, we saw a wall with four “Royal Tombs” as well as small carved out caves and burial chambers. There were also several temples and churches along the way. 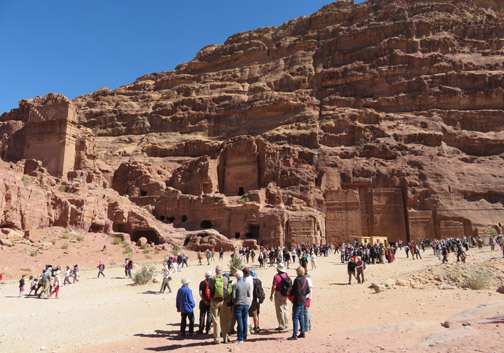 To prevent flash floods when it rained, the city had a system of dams and drainage ditches. A reservoir for water collection provided water to the residents and a fountain located in the heart of the city. 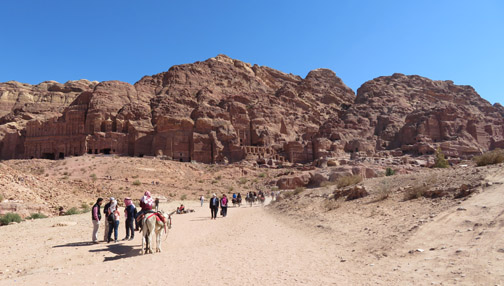 This is a Roman theatre cut from rock rather than constructed. It seats 3000.

The red rock patterns were especially beautiful in this chamber (used today as a men’s restroom.)

We then visited the area of the Great Temple that has been an archaeological project carried out by Brown University. Within the temple district there were two levels and a small theatre area, perhaps used for town council meetings.

Unique capitals were adorned with the heads of elephants – their trunks have broken off.

We walked in but rode out!